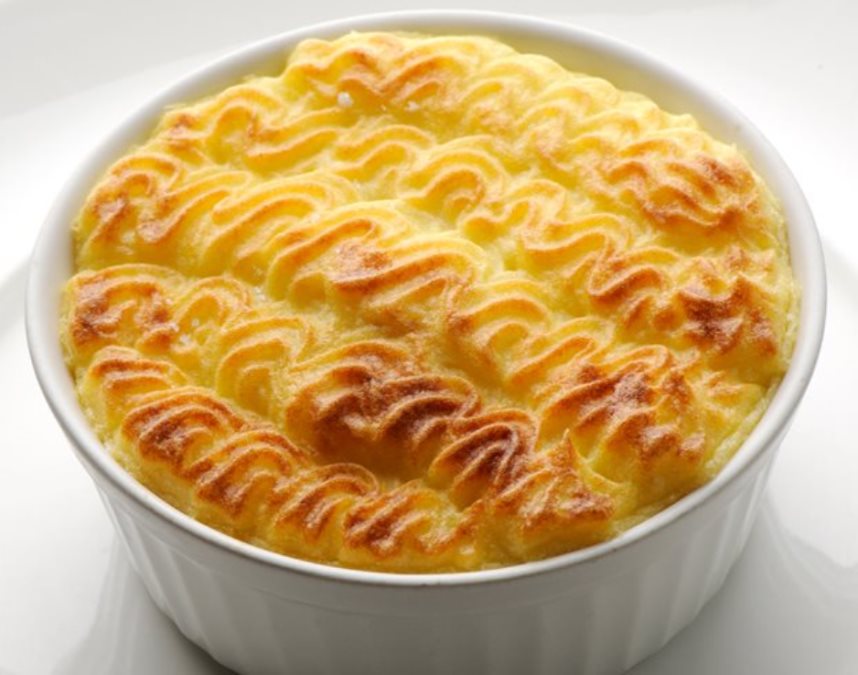 I came across an intriguing piece of information the other day – the origin of the word Pie. Seemingly it is a diminutive of the word Magpie, those beautiful birds who like to gather all sorts of gegaws. It is thought that early eaters of ‘pie’ were also undiscriminating in what went into their savoury versions and it could include crow, pigeon and then there are always the four and twenty blackbirds that were baked in that pie.

The Cottage Pie was, until the 1870’s, a catchall name for a pie usually made of leftover meat, cooked with vegetables and covered in a carbohydrate (breadcrumbs, pastry, potatoes). It was the food of cottagers, poorer people who lived in modest homes and eked out a precarious living. The use of the name Cottage Pie can be dated back to the end of the 18th century but the dish is probably much older.

Cottage Pie came to use potatoes around the end of the 18th century. Potatoes had been introduced to England, Scotland, and Ireland by Raleigh about 1589-90. Initially viewed with suspicion, the potato would become an important staple in the diet of the politically, socially, and economically oppressed and especially in the diet of the Scottish and Irish.

And it is here that ownership is first contested. The written mentions of Cottage Pie precede those of Shepherd’s Pie, with Shepherd’s Pie not being named in print till the 1870’s, after the invention of mincing machines. Some claim, however, both Cottage Pie and Shepherd’s Pie for the Irish with the original Cottage Pie having the poor man’s mutton as its main protein and the later, mid-19th century Shepherd’s Pie containing the more refined and expensive minced lamb. Others, noting the poverty of the population and the volume of sheep in Northern England and Scotland claim that, as a dish, Shepherd’s Pie was probably eaten, by shepherds,  before the 18th century in that geographical area.

Still others turn to cookery books to determine national ownership. In both the 1854 and 1862 editions of The Practice of Cookery and Pastry by Mrs I Williamson, published in Edinburgh, Shepherd’s Pie is not identified as Scottish; it is, rather, taken to be Scottish simply by its inclusion in this book because it was published in Edinburgh. On the other hand, the absence of its inclusion in Scottish cookery books between 1878 and 1956 is taken as evidence of its non-Scottish origin. The one 19th century mention is in the 1877 edition of Ketter’s Book of the Table, where E S Dallas mentions Scotland’s Shepherd’s Pie, albeit with a pastry covering, and the 1932 Edinburgh Book of Plain Cookery Recipes also identifies Shepherd’s Pie as Scottish.

Today, rather than nationality differentiating these dishes, it is the contents which provide the difference. Cottage Pie is, by all informed accounts, made with beef, while Shepherd’s Pie is made only with lamb – the Ivy’s notwithstanding, which contains both beef and lamb. Beef Shepherd’s Pie equals Cottage Pie, whether or not it has cheese on top or the insides are curried. Currying the contents is a distinctly modern adaptation but may have its genesis in the Shepherd’s Pie prepared by Indian chefs and served at tiffin so many years ago. Venison, felafel, and chicken are now common inclusions and the most recent variations include the gluten-free Shepherd’s Pie and the Unemployed Shepherd’s Pie, this last, featured in Vegetarian Times, owing more to the absence of meat than the economic status of the makers.

Although, today, both have a potato topping, Dallas in 1877 and Davidson in 1999 identify the topping for (Scottish) Shepherd’s Pie as being originally made of pastry rather than potato.  And it has to be potato (of the genus Solanum) and not the kumara (genus Ipomoea) or sweet potato, and definitely not rice.

It is not just any use of potato that defines a Shepherd’s/Cottage Pie, though, the potato has to be mashed – otherwise, it is more akin to a Lancashire Hot Pot. And the use of breadcrumbs consigns this Pie to be from Cumberland.

Varieties can be found around the world. France has its Hachis Parmentier (from the man who persuaded the French to eat potatoes), Canada has Pate Chinois, from the pie made by Chinese cooks for North American rail workers in the late 19th century; and in Peru and Chile, they have Pastel de Papa, with its more exotic raisins, black olives, and hard-boiled eggs.

We can be relieved that a 2014 e-petition, signed by over 3,000 people, which called for it to be a criminal offence to wrongly describe a casserole with a lid as a pie, failed to reach the required 10,000 votes to force Parliament to debate the proposed law change. The petition urged the implementation of criminal sanctions upon the owners of food outlets that served items described as pies without a pastry base. Fortunately, an exemption was made for Cottage, Shepherd’s and Fish Pie.

And, finally, despite the historical links between the French and Scottish which included 17th-century trading with Bordeaux, I think that today’s identification of both champagne and claret as the drinks to pair with Shepherd’s Pie show that the dish may have been adopted by a more wealthy clientele than its original humble cottager or shepherd.

The recipe: OK, as a vegetarian, you know I am not giving you a recipe with beef or lamb. But I am giving you something even better, Anjun Anand’s Luscious Spiced Cottage Pie, from her Indian Vegetarian Feast, 2013. I generally use lentils and have even been known to mix kumara and floury potatoes for the mash, and I ALWAYS use more cheese than suggested.