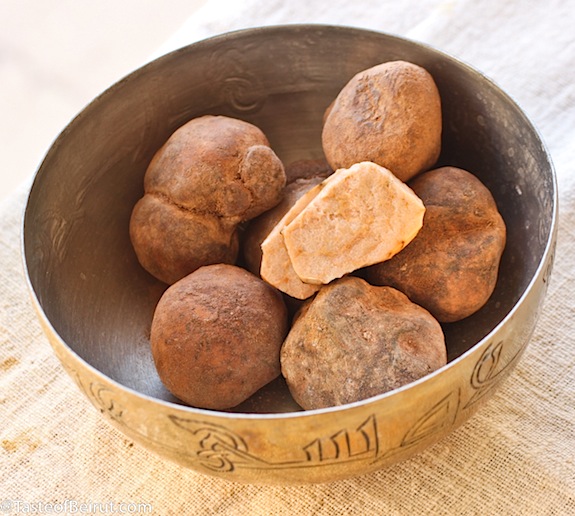 You know how I said the only thing I ‘hated’ was okra (apart from the London Eye and anacondas), well I forgot that I also have a deep dislike of truffles – in their original form, in oil, in vodka, as an ingredient – completely. On the other hand when you find something really interesting which concerns the object of dislike that interest must be satisfied. I don’t actually have to eat but I do have to know. And so I came upon Desert Truffles.

But first some background stuff about truffles generally. Truffles have been around forever. The first mention of truffles appears in the inscriptions of the neo-Sumerians in 20th century BC, and although they were rarely used in the European Middle Ages, they gained favour again during the Renaissance. However it was not till the 17th century that they became widely popular but were said to be so expensive they appeared only at the dinner tables of great nobles and kept women. Growing industrialization, the exodus from the countryside and war, however, led to the decline in productivity in the 19th and 20th century. England’s last truffle hunter died only in the 1930’s.

Truffles don’t really have much of a taste but their smell, the composition of which is said to be identical to the sex pheromone of a pig, can be overwhelming. This is why female pigs (and trained dogs) are used in some countries (but obviously not Islamic countries) to hunt for these scarce and expensive underground fungi.

Worldwide, there are 70 varieties of truffle with 32 of these commonly found in Europe. If you wished, you could consume truffles all year round. Contrary to some accounts truffles do not begin and end with the white (T. magnatum) truffle of Peidmont whose season is October to December; or the black (T. melanosporum) of Perigord, available from January to March. It is true that the largest truffle ever found was a white truffle which was found in 1951 near Alba and weighed in at two kilos for a cost of £3,000, while the highest price ever paid was for a black Perigord which sold for £4,500 per kilo, when the usual price is between £1,500-£1,750 per kilo. However, caution is needed when claiming the origin of a truffle since it is suspected that many of the white truffles that, for years, were labelled ‘Tartufi d’Alba’ (Truffles from Alba) were actually from Istria in Croatia.

Truffles can be found, in Europe, as far north as Sweden and England, and as far south as and east as North Africa, Turkey, Iraq, Syria and Kuwait. The more northern European truffles are the summer truffle (T. aestivum) and the Burgundy or autumn truffle (T. uncinatum), although both of these are more common nearer the Mediterranean.

Truffiere’s can be found as far away as Chile, South Africa, Australia and in New Zealand, there are an estimated 250-350 in the Canterbury area, growing varieties including the commonly available Perigord, Burgundy and Bianchetto (Italian white) as well as the Saffron Milk cap, since 1993. Oregon, USA, has a lively business in both black and white truffles which are held to be just as aromatic and less than one-tenth the price of their famous French counterparts.

But the truffles from the desert countries will never be mistaken, in appearance at least, for those from Europe. Desert truffles are a species of the mushroom family, and are only distantly related to their more pungent, far more costly European cousins. There have been numerous varieties of desert truffles grown from North Africa to the Gulf States. Terfez is the collective name given to truffles grown in Morocco, Algeria and Tunisia, while the Bedouin of the Western Desert call them terfas. In Turkey they are called damalan or borchii and in Kuwait, fagga. English speaking countries call these desert truffles honey truffles. The three most common types are, Tirmania, Terfezia and Tuber. These have been sourced in North Africa for over 1,800 years. The latter, Tuber, grown in Morocco, is similar to the European truffle while the other two varieties, or collectively, kamah, one white (Tirmania) and one black (Terfezia) are larger, lighter in flavour, eaten as a vegetable and grown in for example, the deserts of Syria and Iraq.

Terfezia are dark reddish, dense and more prized than Tirmania. Both resemble smallish round potatoes – some gnarled and the most favoured are smooth – and do not have the same pungent flavour as the European or even Moroccan truffle. The taste is somewhere between a mushroom and an artichoke. Nor are they as expensive as European truffles. In 2019 excellent quality Iraqi truffles cost just $3 for 500grams and a good forager can expect to collect between 2-4 kilos per day.

However, collection is not easy. First there is the problem of locating them in an arid and dry terrain. No pigs or dogs are used. The truffles spring from microscopic spores just underneath the surface of the sand or soil. Cracks in soil indicate the truffle is raising to the surface, another clue is the presence of a grass, called aneyd by Bedouins, and a third is the presence of squat rockrose bushes (sp. Helianthemum) commonly taken to indicate the possible presence of the desert truffle. Big truffles can be almost the size of a tennis ball. If the truffles are not dug up during the few weeks of winter rains, they pop up onto the surface and burst once the sand dries out, spreading spores for the next growth. Those from Iraq have a reputation for being larger.

The second problem is the danger of collecting in war torn areas. In areas such as the deserts of Syria and Iraq, foraging can become very dangerous, with reports of truffle hunters being captured and killed by suspected Islamic State militants. Those from Iraq have fallen into disfavour recently because of fears that fallout from American weapons has contaminated the areas in which the truffles grow.

But since I don’t like truffles of the sporing variety and don’t have access to desert truffles, I bring a recipe for a chocolate truffle, so named because they have the appearance of the fungi.