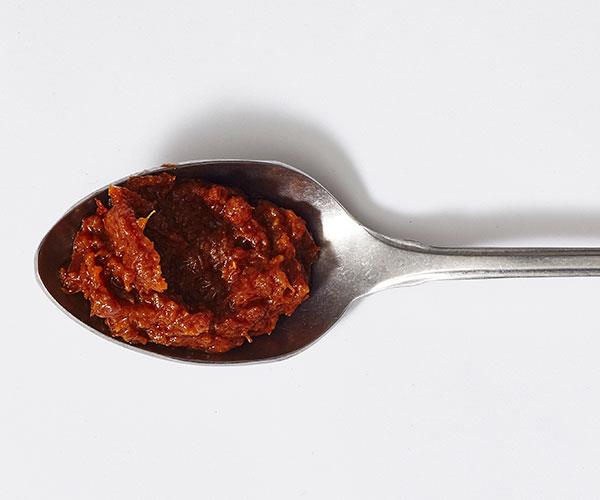 Being curious comes with certain imperatives. Curiosity is not to be reigned in, it is not always polite, it certainly demands to be taken down its own routes no matter where you want to go and curiosity is not always comfortable. This is what I tell myself when I deviate from a clear and purposeful trajectory and find myself adrift in a whole new ocean of information than where I thought I might go. And that is how I got from what was to be an already deviated path from biscuits to Japanese cookery implements via aebleskiver (not a spelling mistake) pans to sauces to satisfying a niggle about a very particular sauce, XO sauce. And not just any XO sauce but the XO sauce created by the new Auckland plant-based restaurant East which is the restaurant of the newly opened carbon-neutral Sudima Hotel on Nelson Street, Auckland. So, although this post is really about XO, first I want to tell you about this new restaurant.

The hotel restaurant is a plant-based restaurant which should not be as surprising as it is when we hopefully find it increasingly easy, these days, to focus on being eco-friendly. However, from experience of, especially hotel, restaurants, I can say that this is only the second I have ever encountered that did not offer fish or meat. The in-room menu is similarly plant-based, as is their breakfast menu. The whole ethos of the hotel is to be ecologically and environmentally friendly and to achieve this the hotel was designed to be carbon-neutral from its inception.

But back to the main event – the food. Talking to Rakesh Chandra, a former chef and now national procurement manager for the Sudima Hotels group, and to head chef, Harmeet Singh Nanda it is clear that the commitment seen in the rest of the hotel features hugely in their preparation of, thinking about, and testing of foods, dishes and components that finally make the grade to be included in their present menu. Looking at the part of the menu I include above, we ate everything on it apart from the Edamame and EVERYTHING was a revelation in taste, texture, appearance, and deliciousness. I thoroughly recommend this to everyone. A note: don’t be fooled that those dishes without a V mean there is a meat component, no, it simply means that the dish is vegetarian and V means vegan. Such a luxury!

What saddens me is that, although we ate the ‘Steamed mushroom cheung fun, XO, with crispy garlic’, and found it deeply satisfying, I could not find photo to share with you. But, please, don’t let that put you off, it tasted very fine. The XO had hints of celery root and corriander and was smooth and dark. Next time, Large Plates and Salads. But finally here is a preview of one of their desserts (to die for, says Rob):

Now, back to XO and the origin of XO sauce. It is a relatively recent invention dating from the 60’s (Meera Sodah), or the 80’s (Siobhan Hegarty, Kristie Hang); invented in the Spring Moon restaurant in the Peninsula Hotel in Hong Kong, or Kowloon, or more generally, the restaurant scene in Hong Kong. Definitely Cantonese in origin, Kristie Hang says it has become a staple in southern Chinese cooking, especially in Hong Kong and in Guangdong Province.

The name derives from two sources: the term, XO, is a Hong Kong shorthand for prestige and luxury. It also takes its name from the XO (extra old) of the Remy Martin congac which was popular and seen in Hong Kong as a mark of affluence and exclusivity. Certainly, it fulfills this last precept by using luxury ingredients – dried squid, scallops, shrimp and a ham (Jinhua). The dried scallops themselves can sell for up to $300NZ per kilo and a small jar of XO for $50.

Typically, ingredients are as mentioned above, plus, chilli, garlic, onion all of which are rehydrated and chopped. When we think of chili and heat, Diana Kuan from Appetite for China, compares XO to other, perhaps more common, Asian hot sauces, says that. ‘There are many instances when Sriracha, sambal oelek, or sweet chili sauce would be the perfect addition to a dish. But when you want a hot sauce that has insanely rich umami flavors while also packing heat, XO sauce is the one to reach for.

As to texture, China Doll head chef Frank Shek says that ‘What you want in a good XO, is texture and mouthfeel and mouth bite. So if everything’s mashed to a generic pulp, it’s very hard to discern all the star ingredients.’

Pat Nourse, in Gourmet Traveller, talks about how chefs today are finding wider applications for the sauce and that ‘Today’s Australian XO sauces can be vegetarian or vegan, Indigenous or Caribbean, yet they’re still identifiably XO in origin’. Jock Zonfrillo, chef of Orana, talks about the layering of flavours in the traditional fish and meat based sauce, before going on to explain how he achieves this layering in one of his XO variations which is vegan. Zonfrillo, a confirmed meat eater, says he ‘works to mimic those layers by drawing on Orana’s bank of fresh and fermented Indigenous ingredients. It’s intense, and not vegan-tasting at all thanks to the depth and complexity,’ he says. ‘And because of the cost of the native stuff, it’s in keeping with the tradition of it being super fucking expensive.’

XO as a condiment has a multitude of uses. The easiest way is to add it to a bed of rice or noodles and top with an egg. Add to roasted vegetables, scramble into eggs, stir-fry – the list is endless.

Of course, as Sabrina at Straits Road Kitchen in Hong Kong says, whether fish/meat based or vegan the moreishness of the sauce comes from umami in the ingredients used. The chart of foods below show those containing umami, ranging from very small quantities on the left to an abundance on the right. At the top are those foods with basal umami (from glutamate or MSG); on the bottom are those with synergistic umami (from nucleotides). The trick is to combine a basal item with a synergistic item.

In their book Umami: Unlocking the Secrets of the Fifth Taste, Mouritsen and Styrbaek explain that glutamate occurs naturally in some fresh foods, e.g. asparagus, potatoes, walnuts, and is increased over time as more as proteins break down through ageing or fermentation. However this basal umami can be intensified and multiplied by eight times or more by complementing with the nucleotides inosinate (IMP), guanylate (GMP) or adenylate (AMP). Mushrooms, particularly dried shiitake mushrooms, are full of GMP.

Thus, as Sabrina says, it makes sense to use dried shiitake mushrooms, nori, kombu, tamari, and garlic for basal umami; and more dried shiitake mushrooms to provide synergistic GMP. The smoky notes of toasted cumin, smoked paprika, while not contributing direct umami, accentuate its effect through deepening the flavour of the sauce. I came across many recipes for Vegan XO sauce or relish, including Diana Kuan’s from her 2019 book Red Hot Kitchen, Meera Sodha’s from her new book, East, and from Mccormick.com. But it is the complete and complex Vegan XO Relish from Sabrina at Straits Road Kitchen that I bring for you today.