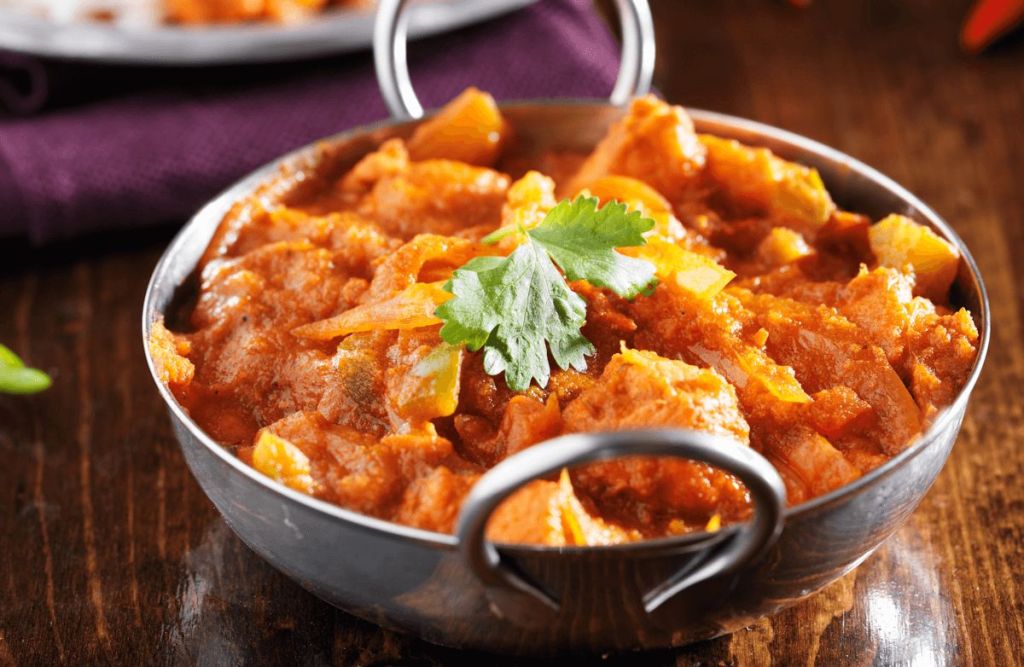 It is over 50 years since I went on my first date with Rob. He asked if I liked curry. What could I say. I may have been a student of cookery at the time but curry was way outside of my remit, with my experience of it restricted to the tiny teaspoon of generic curry powder that we were allowed in our classes to add to a ‘stew’ to make it into a ‘curry’. So I said yes, and Rob then proceeded to introduce me to the hottest variety of curry then available, a vindaloo. I have never eaten one since.

The vindaloo with which most British are familiar is a tongue numbing, mind blowing, eyes streaming, eight pint (of beer) concoction that really bears very little resemblance to the Goan dish of its origins.

‘The correct spelling, vindalho, gives away the main seasonings of the original dish which was once a kind of Portuguese pork stew seasoned with garlic (alhos) and wine (vinho). There were probably some black peppercorns…the vinegar acted as a preservative allowing the stew to be eaten over several days’

In Goa the original Portuguese recipe (carne de vinha d’alhos), based on the pork introduced by those 14th century explorers and colonisers, was developed locally with the addition of ginger, cumin, cloves, cardamom and those ubiquitous but overplayed red chillies. So an authentic, tangy vindaloo tingles the tongue with pepper, clove and other spices, rather than beats it with the one-dimensional heat of chilli powder.

Felicity Cloake’s 2018 article from her series ‘How to cook the perfect…’, details which meat, masala, vinegar and vegetables all combine to produce the ‘perfect … vindaloo’. However, since neither pork, duck or ‘shin of beef’ are ever seen on the chopping boards of the Allen household, I thought you might like the lighter and fresher Sweet Potato (Kumara) Vindaloo from the wonderful Meera Sodha.