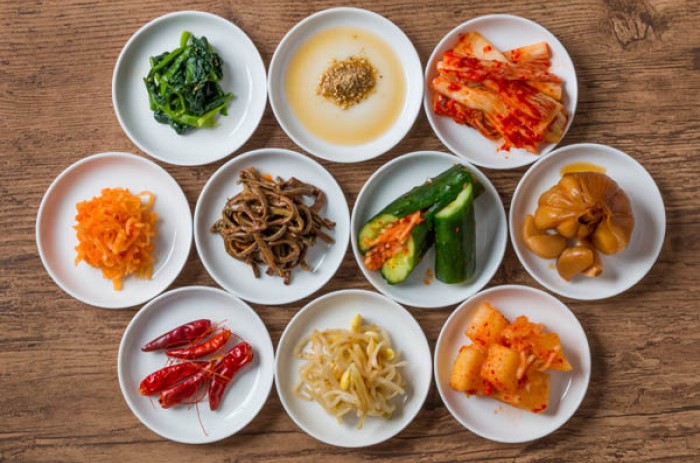 One year friends came to eat with us and instead of the usual dishes and courses we created a long board of cheeses, preserves, fruit, vegetables, spreads and dips. We went to the local timber yard and they cut us a 3 meter by 45cm length and tidied the ends for us, we put two tables together to make room for 16 people, added table cloth and napkins and it was perfect. It was a very sociable event with lots of laughter and talk.

It occurred to me that eating little bits and pieces, as well as being very satisfying, has long traditions, certainly in European cultures, with canapes, finger foods and hors d’oeuvre. But most of those are eaten standing up. To appreciate the sorts of bits and pieces that are eaten sitting down at a table with others, you really need to look just a little further afield. Perhaps the Swedish smorgasbord, which, when it is a full buffet meal, as well as various seafood items, is accompanied by ‘smavarmt’, small warm dishes, cold meats, cheese and fruit. Or perhaps the Mediterranean mezze, where sometimes mezze functions as part of a main meal (Egypt, Morocco, N.African Muslim countries), or a little like ‘tapas’ in for instance, Spain, Turkey, the Balkans. Greek Tsipouro taverns commonly serve an extensive mezze menu.

The category Mezze will include national specialties but often will share a cross-national common understanding of what constitutes small food. Thus olives, cubes of cheese, dips such as cucumber and yoghurt, aubergine puree, hummus and salads such as dolmas, tabbouleh and falafel can be found all over the Middle East, Turkey, Greece and N.Africa. Lebanon is renowned for the quality and variety of its mezze, which includes savoury pastries, pickles, black thyme breads, tiny pizzas with golden pine nuts and the use of herbs and spices (think mint and paprika), among many others.

Then, of course there are the incomparable Thalis of India and Pakistan, be they meat based or vegetarian, served on a tray and incorporating rice, bread, pickle, and generally four to eight small dishes of the most delicious savoriness.

This idea of small dishes, though, has achieved its pinnacle with the Banchan of South Korea. Banchan is a term referring collectively to side dishes in Korean cuisine.Banchan are served in small portions, meant to be finished at each meal and are replenished during the meal.Banchan is thought to be a result of Buddhist influence at around the mid-Three Kingdoms period (57 BCE – 668 CE) and the subsequent proscription against eating meat by the monarchies of these kingdoms. Thus, with the ban on meat-containing dishes, vegetable-based dishes rose in prominence and became the focal point of Korean cuisine.

Traditionally, baking or frying were not common Korean cooking methods, rather fermenting, boiling, blanching, seasoning, and pickling were used. Among these methods, the most characteristic method is fermentation, thus the sophistication of the Kimchi. Kimchi is served at every meal.

No Korean meal is complete without a selection of at least a few banchan. Many people like to eat them as appetizers, notes Eric Kim, though they’re meant to go alongside the rest of the meal. Most restaurants serve them on the house, as a gesture of hospitality. The small side dishes are served in the middle of the table for everyone to enjoy. Banchan are usually chilled or at room temperature. According to the number of banchan added, the table setting is called 3 cheop (삼첩), 5 cheop (오첩), 7 cheop (칠첩), 9 cheop (구첩), 12 cheop (십이첩) bansang, with the 12 cheop used only in Korean royal cuisine. Note that, apart from the royal cuisine, all Banchan are served as odd numbers dishes – even numbers are bad luck in Korea.

Michael Natkin tells us that there are hundreds of different banchan recipes, many of which can be whipped up in just a few minutes. Here are some from Serious Eats

There are sites, videos and books which instruct you how to make Banchan:

Kim says that, ‘As the selection of banchan can look different at every restaurant, so, too, can it vary in every home….If there were any rule to banchan, it would be that there should be a sense of harmony in the spread: a variety of vegetables to balance the protein, and something salty, sour, spicy and sweet. But at the end of the day, it’s your bansang, or table setting. Fill it with the flavors and textures you love most.’

So yesterday Rob went to iMart, a Korean grocery shop in central Auckland and bought 5 Banchan which he knew we would like. Here they are:

The Stir Fried Lotus Root has cinnamon as well as the usual soy sauce, sesame oil and seeds; the Perilla Leaf is pickled in soy sauce, chilli, sugar and salt; the Pickled Radish contains carrot, onion, sesame oil and seeds; the Egg Roll also has carrot, plus spring onion and the Seasoned Tofu contains everything above, apart from the cinnamon! All are very good. (note: perilla leaf in this instance is the Korean Perilla frutescens, a minty smelling plant grown as a crop, rather than the P. frutescens var. crispa or “shiso”, which is the Japanese variety)

Here are three banchan which you may like to try.