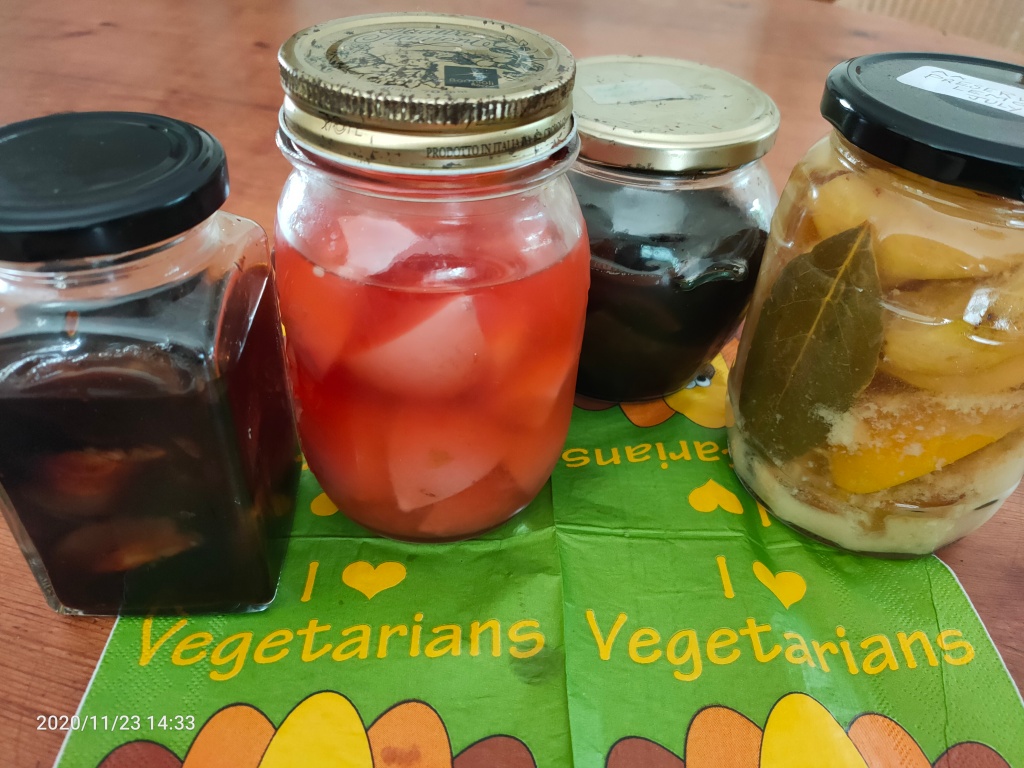 I remembered, when I wrote about Bialy, that just round the corner from Kossar’s, on Essex Street, was my second favourite kind of shop – a pickle shop. I am happy to see that they have moved to be just a few doors away at the end of the street from Kossar’s.

Your nose could lead you to The Pickle Guys, the last remaining pickle vendors on the Lower East Side, NYC. The Pickle Guys make barrel cured pickles, which is an old Eastern European technique. They store their pickles in barrels, from a day up to six months, and the pickles cure as they sit in salt brine with garlic and spices. The other method of pickling is to use vinegar.

Foods that can be pickled include vegetables, fruits, meats, fish, dairy – yes, think brined cheese – and eggs. Pickles have been in existence for thousands of years and are found in many cultures’, says Sydney Bergman, an intern at the Museum at Eldridge Street. In Mesopotamian times, pickles were born out of necessity and were made by fermenting fruits and vegetables in a salty liquid (brine) for long enough that they wouldn’t spoil on, say, a long sea voyage. According to the New York Food Museum, the earliest known example of pickles occurred in 2030 BC when native Indians brought cucumbers to the Tigris Valley.

Famous lovers of pickles include Queen Elizabeth I, George Washington, Napoleon, Cleopatra, and Thomas Jefferson, who was reputed to say, “On a hot day in Virginia, I know of nothing more comforting than a fine spiced pickle.” William Shakespeare not only peppered his plays with references to pickles, but he also introduced the use of the word “pickle” as a metaphor. In Hamlet, Shakespeare writes, “Oh, Hamlet, how camest thou in such a pickle?” Even Napoleon valued pickles as a health asset for his armies. He believed in the power of pickles so much that he offered the equivalent of $250,000 to anyone who could develop a way to preserve this food item and others safely.

So, as little science as possible, promise – the main methods of pickling are by salt (brine) or by acid or a mixture of the two. Brine cured pickling can be seen, for instance, in the pickling of cucumbers. No heat is needed for this form of preservation and fermentation takes place because of the action of the naturally occurring bacteria and brine which produce lactic acid. Lactic fermentation is used to make various forms of pickles and also sauerkraut, kimchi, yogurt, and sourdough bread.

For acid pickling, any type of vinegar can be used. In the UK, white or more commonly malt vinegar is used to pickle watery foods. White vinegar is purified vinegar. It is a type of vinegar that contains only acid and water – it makes a less flavoursome pickle. On the other hand, malt vinegar, which give more flavour, is a grain-based vinegar. Malt vinegar is derived from malting barley. After the barley is malted, it is then fermented to ale, which is then turned into vinegar. Wine producing countries use wine vinegar. Rice vinegar is used by Asian countries for pickling.

Most pickles are heated (apart from lactic varieties) to sterilize them and can be stored for 6 months or more to assist the development of flavour. Bon Appetit, though, suggests that ‘quick pickles’ should be consumed within two months. Quick pickles are also known as refrigerator pickles. They are simply vegetables that are pickled in a vinegar, water, and salt (sometimes a small amount of sugar, too) solution and stored in the refrigerator. Quick pickles don’t develop the deep flavor that fermented pickles do, but they also only require a few days in the brine before they can be enjoyed.

The last category of pickle I want to note are those vegetables which are simply put up in acid for more immediate consumption. There are many wonderful and varied examples of acid basting. They are usually vegetable, may use a fruit acid, take a couple of minutes to prepare and even less to consume. I am thinking here of, for example, Melissa Clark’s ‘Pickled Onion’, where onion is sliced and marinaded in an mixture of salt and lime juice (and a pinch of sugar) and used as a topping for her Skillet Chilli.

Most cultures have their own unique pickling method. In Iran, you might find your soup studded with ghooreh, which are sour pickled grapes. Petits cornichons are regulars on Parisian charcuterie plates. And Indian stews are often served with a side of oil-pickled mango or lime. I think the only reason to grow the Italian cippolini onion is to pickle them in balsamic vinegar. But I have to say one of my very favourite pickles is Japanese Pickled Mushrooms and so that is the recipe I offer this week.