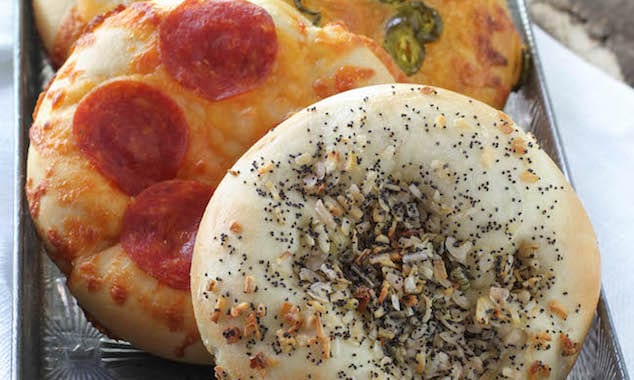 I thought this was going to be quick, lighthearted, feel-good post. I wanted to write about the bialy shop we visited in New York (twice, they were so good); how bialy were better than bagels, how they were not so well known but deserved better – and then I did my research, found some history.

The LA Times tells us that, ‘The name “bialy,” comes from “Bialystoker kuchen,” or bread from Bialystok, a town in eastern Poland near the Russian border. Before World War II, Bialystok was home to a large and vibrant Jewish community (nicknamed “Bialystoker kuchen fressers” for their affection for the breads). Today, there are no bialys to be found in Bialystok; in fact, after a century of pogroms, Nazis, Soviets and skinheads, there are only a handful of Jews’.

The bialy, this poor cousin to the bagel, has been exhaustively researched by food journalist and cookbook author, Mimi Sheraton, a former restaurant critic for the New York Times. She writes about bialy in her book ‘The Bialy Eaters’, and the publicity for her book says:

‘She set off from New York in search of the people who invented this marvelous bread. Instead, she found a place of utter desolation, where turn of the century massacres, followed by the Holocaust, had reduced the number of Jewish residents there from fifty thousand to five.
Sheraton became a woman with a mission, traveling to Israel, Paris, Austin, Phoenix, Buenos Aires, and New York’s Lower East Side to rescue the stories of the scattered Bialystokers. In a bittersweet mix of humor and pathos, she tells of their once vibrant culture and its cuisine, reviving the exiled memories of those who escaped to the corners of the earth with only their recollections, and one very important recipe, to cherish’.

Bialy now show up in any place that has a sizable Jewish population, whether or not that population has ties to Bialystoker. However, if you live outside of New York City, LA, parts of Chicago or Florida then you may never have crossed paths with this bread.

The traditional bialy, unlike the bagel, has no hole, it is matte not shiny, it is not boiled but baked, it is lighter and chewier and the depression is usually filled with caramelised onion and/or poppyseeds. They contain no preservatives and are best eaten the day they are cooked.

I was fortunate to be able to visit Kossar’s, (Grand St, Lower East Side, New York City), who Grubstreet reckons is possibly the world’s most famous bialy bakery. I visited in 2014 before it changed hands in 2016. The change of ownership and storefront has not affected the quality of the product although it has resulted in an increased range of bialy.

Our Bialys? We’ve been at it for almost 80 years, and they haven’t changed a bit. And that’s quite an accomplishment.

Often called the Jewish English Muffin, the bialy is softer, chewier and lighter, with no hole in the middle. We make them by hand with only 4 ingredients. All natural wheat flour, kosher salt, water, and brewer’s yeast. They’re traditionally filled in the center with roasted onions or garlic. We’ve taken that tradition a step further and now offer several varieties, including sesame, sun-dried tomato, and olive.

I can attest they are so much better than the bagel, especially toasted lightly (Bialy are notoriously difficult to slice and in fact the Boston Globe reckons that novices need to watch out for finger loss) and spread with cream cheese. But I have to say when I ‘discovered’ them in 2014 I thought of them as just another ‘tasty snack’. Reading Samuel Pisar’s section on them was sobering and now I shall eat them with more appreciation of their significance and history.